Today’s Apache 101 presentation at IT-Ology went well – 20-something attendees, and plenty of questions asked and answered. If you couldn’t make the presentation today – or if you did, but you want to refer to the slides later – you can find my slide deck at https://jrs-s.net/apache101/. 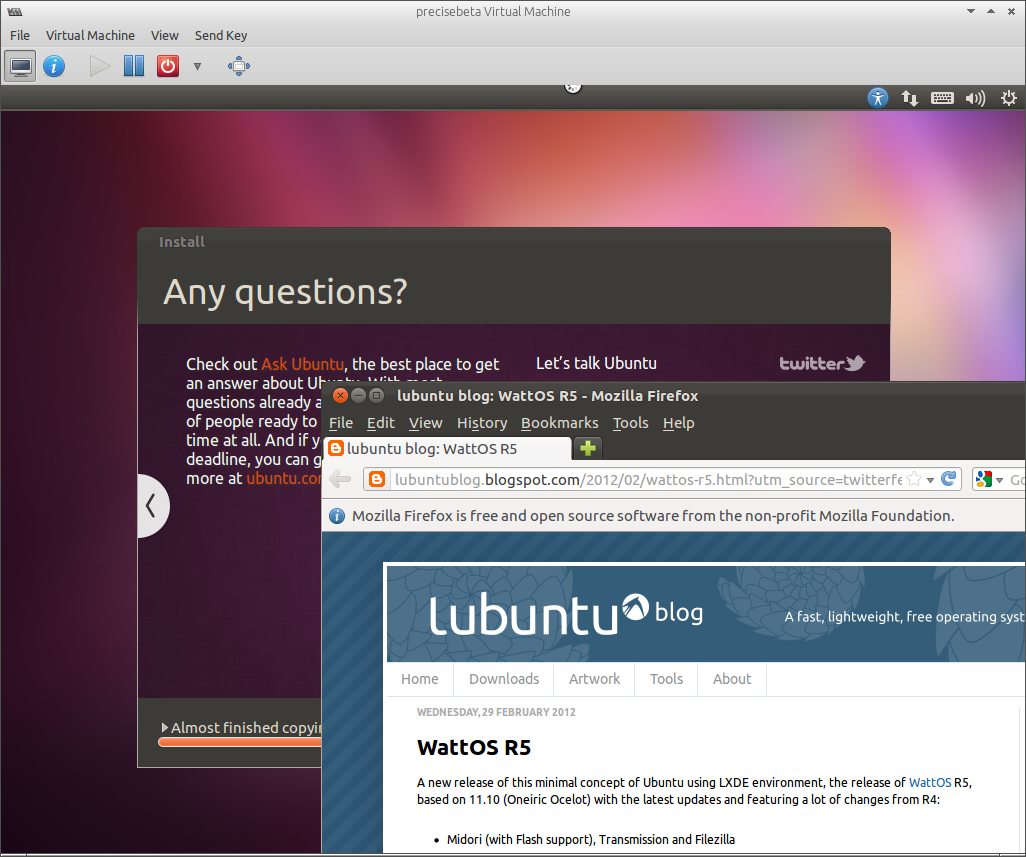 OK, this is the coolest thing ever – I decided to download the beta for the upcoming Ubuntu Precise Pangolin (12.04 LTS) release and do some testing.  And I start installing it in a VM, and *while* it’s installing, I see it populate a dialog with Ubuntu-relevant links, and curiously, I click one… and BAM, instant fully-functional, working Firefox!

So, while you’re installing your operating system, you can goof around on the internet.  Seriously, how cool is that?!

I just finished the LibreOffice Impress presentation I’ll be using when I give my first Linux Sysadmin 101 talk at IT-ology this weekend.  The hardest part is always making graphics!

One of the things that I’ve missed on the Linux desktop is simple audio tone control in the sound volume applet. It particularly annoys me that Gnome allows you to set cruddy little reverb profiles (wow, all my audio sounds like a dog barking now… uh… thanks…), but if your speakers need a little help in the bass or treble department, you’re out of luck. Well, now you’re not!

The PulseAudio System-Wide Equalizer is available from its own Ubuntu PPA, and it is a thing of absolute beauty. I particularly like the fact that the bottom slider is centered at 50Hz – where you want it to add a crisp punch to capable speakers – rather than at the more common 80Hz or even 100Hz, which is more immediately audible but also muddies up the sound rapidly.

Thank you psyke83 for this excellent tool!

If you’ve never seen a machine equipped with a good Solid State Drive (SSD)… they’re pretty impressive.Â  In this clip, I’m putting an Ubuntu 9.10 workstation with an Intel SSD through its paces.

Some of the reason that machine is so fast is Ubuntu – the newest release has some pretty significant disk speed related enhancements – but the vast majority of it is the solid state drive.Â  (For those of you not familiar with Linux, it might help you to think of GiMP as “Photoshop” – both because it does pretty much the same job, and because both are notorious for being EXTREMELY slow to start up.)

You do have to be careful when you’re buying an SSD, though – they’re not all created equal.Â  In fact, some of them are absolutely atrocious, with significantly worse performance than conventional hard drives… so you need to know what you’re doing (or trust who you’re buying from) when you go that route.Â  In particular, anything with a jMicron controller in it is better taken out back and shot than put in a production machine.Â  You also need to be aware that you’re going to pay a lot more per megabyte for solid state – an 80GB SSD costs about as much as two 1.5 terabyte conventional hard drives.Â  So you probably don’t want SSDs (yet) for tasks involving large amounts of bulk storage.

But, as the video demonstrates… if what you need is performance, there’s nothing else in the same league; a few hundred bucks spent on a good SSD will give you more real-world performance benefit for most tasks than several thousand dollars spent otherwise.

It’s also worth noting that the current generation of SSDs are generally 2.5″ form factor, meaning they fit interchangeably in notebooks, netbooks, or desktop computers.Â  You typically won’t see as much of the top-end performance on a notebook or netbook – their SATA controllers usually bottleneck at a third of the top-end speed of the best SSDs – but they’re just as much (if not more) worth the upgrade, because conventional laptop HDDs perform much more poorly than full-size HDDs, so the speed boost is even more of a blessing.

Bad Behavior has blocked 2810 access attempts in the last 7 days.